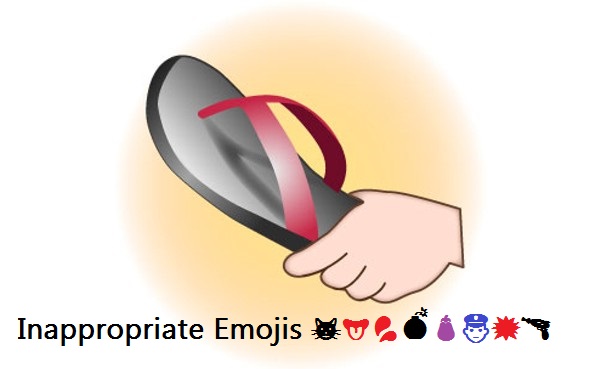 Have you ever clicked the wrong emoji that's totally inappropriate for the situation. Which is the "my lack of proficiency with the written word compels me to rely upon cartoon-esque characters created by the Japanese" emoji. I couldn't post the same one from Instagram it had an inappropriate emoji for people like my grandparents to read. Wow, suddenly I'm figuring out the emoji trend and I am feeling nervous I will send some kind of inappropriate signal after years of robotic texting, it's now a viral social media trend. That awful moment when you send a message with a completely inappropriate emoji.

On a scale of 1 to 10 how inappropriate is it to send any emoji to your boss? On the other hand, if my boss could stop sending me winky emojis and asking me out maybe I'd go to work more often. So gross you're my parents age! Not ok! My boss just sent me the heart eyes emoji. Since we're clearly being honest with each other I replied with a monkey with a gun to its head. Sometimes my boss responds to my emails w/a smiley face & I think,"wow, I made someone happy-weird." Then I remember emojis don't mean shit.

Working really hard on my acting stuff at the moment, my fave thing to practise is facial expressions, all of my complex human emotions being reduced to - I feel like an emoji! Guys are so lame and not creative when it comes to flirting emojis. Every time my mom uses single emoji responses to my text messages, I feel extremely proud. The smiley face emoji is my way of saying: I acknowledge receipt of your text and I decline to reply at this time. Does me not being able to see your emojis without my reading glasses mean I have to quit telling folks I'm only 29?


I would use more smiley faces etc but sadly I needed words to get my point across and not emojis. It takes me 10 seconds to write my text and 3 minutes to pick an emoji that I think goes with it. After a breakup it kills me to think of my ex using emojis generally reserved for me for someone else. In my contacts you can go from nickname with emojis to full name and date of birth real quick. I'm not one to usually use emojis, but the ones people typically use are so lame compared to others. Apple made the emoji buttons smaller, I gotta be careful. I've probably sent the wrong emoji to some people, giving them the wrong idea. I like to use the darker emojis to give the impression that I'm tanner than I am in reality. Is that wrong? Shout out to hitting the wrong Emoji that makes things a little awkward. When you press the wrong emoji and it completely changes the way the comment was meant to come across.