Indian CEO's Are Taking Over The Tech World! 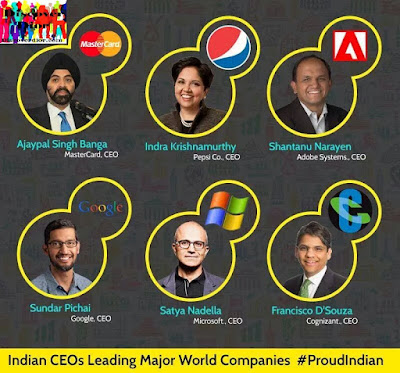 Google has a new CEO, as the CEO of Microsoft, Nokia, Adobe, Pepsi are also Indian and now one more Indian have come to join their league. In the meantime Pakistan is still trying it's best to reach the top level by trying to enter Kashmir. Nothing really to be proud of..It's brain drain. Indians are a sixth of the world population..so what if a sixth of the top cream comes from India?? Who else is going to do the job. Congratulations Mr. Sundar Pichai! You have done Indians proud! Proud to be Indian! Now the world is belonging to India, we have enough intelligence to run the world now. But the ghetto part of me screams out the belief that India is waste and worthless country. First it was the Indian CEO of Microsoft, now this. It seems as if there's no other nationalities who aspire to be a leader in the tech world. The Indian CEO salary list is highly impressive. Who was that Indian CEO that died of a heart attack? I dream to earn an Indian CEO's salary. Has there ever been an Indian who died due to lack of sleep? I am going to research some of America's youngest Indian CEO's..... I can't provide a platform to their genius people. Why India!

Congratulations to Mr Pichai! However, I don't understand the need for bashing other countries or people! If you are proud to be Indian, great! If I were Indian, I would too! But why is there the need for Indians to bring Pakistan into this an abuse Pakistanis? And why are Pakistanis abusing Indians? Celebrate the man's success by coming together, not by creating further differences. Push for Peace! 13% of all initial start ups in silicon valley were founded/co-founded by Indians! We need to make a decision beyond country, religion, caste, sex, color & other barriers which comes in the way of selecting and supporting the talent then the world will move further...stop chasing followers start looking for leaders....It's not about an Indian whosoever & where ever has the capability....though I don't know him and his goodwill but it's an example..Sundar Pichai - CEO Google, Satya Nadella -Microsoft CEO, PepsiCo's CEO - Indra Nooyi, MasterCard CEO - Ajay Banga, Rajeev Suri - CEO Nokia, Anshu Jain -CEO -Deutsche Bank and Shantanu Narayen-CEO at Adobe. Just so you all know, becoming the Google CEO is an individual achievement and not a win for Indian-ness.