Do It For "The Gram" 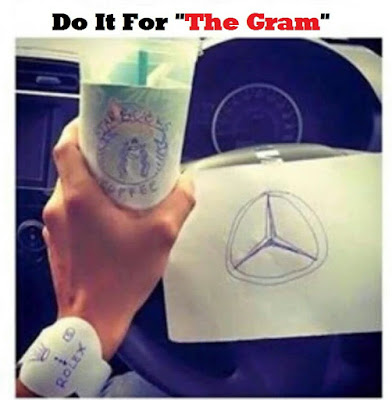 Our generation is full of do it for the gram kids. The term "do it for the gram" is used by people, mainly teens who fabricate content just to post on instagram. When I'm on the other end watching people front for the gram, I never understood it. Only a few REAL relationships out here the rest of y'all just do it for the gram. Is Instagram your social media weapon of choice? You need to read these tips because you might also be one of those people who does everything for the gram.

Some of  you all lead me to believe that you didn't even touch the water during spring break. Going full glitz on, by wearing stage makeup at the beach. All you did was do it for the gram. You don't need to write a paragraph under a picture or video of you showing off. We still know you only do it for the gram. I hate it so much. I swear this generation has no idea what real relationships are, it's all for show on Twitter and Instagram.

Some people comment on photos on Instagram while registered on fake accounts to look like they have more friends than they actually do. People who use the apps to get fake likes on Instagram need to chill the heck out. Today, I texted a girl I met at a bar. She accused me of being "fake" because she couldn't find me on Instagram or Twitter. If you have a few followers on instagram and get 500+ likes with no comments just assume your likes and followers are fake.

Your average person on instagram is not the only one faking it. 50 Cent tells a court that the money he flaunts on Instagram is fake because his fans are broke and like to live vicariously through him, so he bares the responsibility of pleasing his fans by posting fake cash on social media. Now it's a viral social media trend that 50 Cent has declared that the fat stacks of cash he flaunted on Instagram during bankruptcy proceedings are fake. Ironically posting fake money on instagram is going to cost 50 Cent close to 20 million of his REAL money. At the end of the day is it really worth fabricating your images just for the gram.

discoverdior Do it for the gram social network trend the gram

Reports gunman opened fire inside mosque in Christchurch's Hagley ParkSecond shooting has occurred at a mosque in suburb of LinwoodReports of a third active shooting unfolding outside Christchurch Hospital.
What's known about the suspects:
New Zealand police say they have arrested three men and one woman. One man has already been charged with murder. An account believed to belong to one of the attackers featured a link to an 87-page manifesto filled with anti-immigrant, anti-Muslim ideas.
Meanwhile, police have mobilized every national police resource to respond to the attack.


(CNN) - "The disturbing video which has…