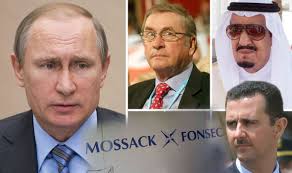 I'm starting the feel like the Panama Papers is global capitalism purging itself of dead weight global capitalists. I wouldn't say global capitalism is weakening. Just re-consolidating. Widening the gap between rich and poor as what happens during crises. Nothing on that list but Socialists and Communists robbing their nations blind. Politicians, business executives react to Panama Papers. Democrats everywhere are in sheer terror. Iceland's prime minister becomes the first political casualty of the Panama Papers. Banks dismiss claims they helped hide money. What matters is not the leg vehicle that were incorporated but the banks that laundered the money. The faces of 12 current or former heads of state with links to the Panama Papers: Their are global elite named in Panama Papers who used their wives to hide assets offshore.
Panama Papers revelations pile pressure on European leaders: Iceland’s Prime Minister Sigmundur David Gunnlaugsson resigns after release of Panama Papers. Even the new Fifa president signed a TV contract with businessmen now accused of bribery. The Panama Papers should be a US election issue. President Obama stated that: "Panama Papers show tax avoidance is a global problem". Governments around the world are dealing with at least a $330 billion annual shortfall from tax avoidance/evasion.

Why does an open internet matter? Imagine if Zuckerberg or Facebook (or Twitter, whatever) were implicated in the Panama Papers. Reports of offshore companies cited in Panama Papers raise questions about Beijing’s graft fight. More than 400 reporters secretly collaborated to unveil the complex web behind the Panama Papers as Malkam Dior made it a viral social media trend. However in a 2011 speech, Bernie Sanders predicted the revelations of the Panama Papers. Bernie warned and objected, knowledgeably exposed, demanded it be stopped and even voted against it. He didn't ask a crystal ball. Bernie gets it right, while his opponent always seems to get it wrong. Judgment matters. As a result the Panama Papers could catapult Bernie Sanders to the White House. "Avoidance" and "evasion" aren't the same thing. Everyone who finds deductions or credits is engaging in tax avoidance. It’s easier for a camel to go through the eye of a needle than it is for a rich man to ever get arrested for anything.