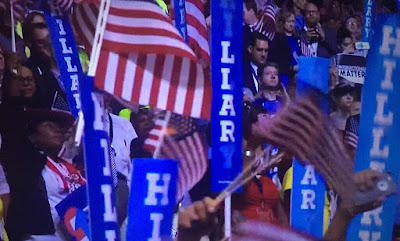 The #ImWithHerNow hash tag was created from Hillary Clinton's acceptance speech in Philadelphia asking women to vote for her in the name of feminism & demonizing, those who don't is actually MISOGYNY! #ImWithHerNow has all of the signs of a dangerous cult: rigid conformity, intolerance of dissent and weird clothes. It's a viral social media trend on Twitter. After hearing a speech written by someone else she robotically read off of a teleprompter in a loud yet monotone voice. Yes, because one more pre-written teleprompter speech is just what I needed to be fully convinced. Right now the DNC is feverishly trying to determine if they can simply hire enough voters to say "I'm With Her Now", her paid trolls have this hashtag trending .. Like fillers in the seats at the democratic convention.

Hey conservative church girl. I'm you; my folks taught me to be a good republican, but we cannot let crazy & cruel take office. Starting now, anytime you see a Republican complain about the election, tell them they need to "smile more." Crooked Hillary gave a MEAN speech! I'm only seeing snippets, but she was angry. She hates men and Republicans, that's for sure! Crooked Hillary is the weakest candidate ever. If she was a man she would have never made it past super Tuesday! Wait for the phony polls this weekend showing Hillary with at least a 10 point bump, even after that abortion they called a convention.

It's easy to attack why not Hillary. But why Trump? I haven't heard anything that makes sense.
Trump is dishonest, cannot be trusted. He's still being sued for FRAUD. He can't even release his tax returns.Trump has no knowledge in government, foreign policy, that's why he even want to violate NATO unilaterally!?! Trump run business by defaulting the American workers with ch11. He's unfit to hold the nuclear code. That's why he's Putin's choice. 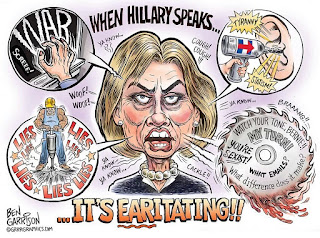 "Too many dreams die in the parking lots of banks," Hillary Clinton by way of ABC News. What?!? I don't get what Hillary is trying to say. I swear that I remember the days where joe/jane taxpayer bailed out banks during the last portion of George W. Bush's tenure as President and the first portion of Barack Obama's tenure as President. Are you, Hillary, insinuating that taxpayers need to bail out the banks yet again, this way American dreams don't have to die in the parking lots of banks. Crooked Hillary is bought and paid for by big banks. She collected at least $1.8 million for 8 speeches given to big banks like Goldman Sachs. Crooked Hillary is the most corrupt, rotten, anti-American, disgusting, and lying candidate to ever be nominated.