Getting The Black Vote 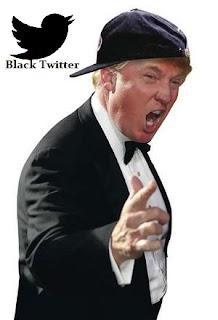 Hillary and Trump fighting for the Black vote feels like two parents fighting over custody just so they can claim you on their taxes. Crooked Hillary seems to not understand the complexity of people living in poverty because she's in denial. Wake up black people, when Donald Trump asked to Black America and legal Hispanics: "I'm asking for your vote. What do you have to lose?" When was the last time you heard this from a GOP? So, while we're watching Presidential nominees call each other bigots, let us remember that there's no day 1 plan to stop police from killing us. This part of the election. "Fighting" for the black vote while...not actually talking TO black people OR proposing BLACK SPECIFIC policies. Black Lives Matter protest gets DESTROYED by a Louisiana flood. Donald Trump showed up, to support the families while indirectly sayin, "I am asking for the vote of every African American citizen in our country who wants a different future". It’s difficult to imagine a much worse pitch Donald Trump could have made for Black Votes, now it's a viral social media trend on the internet. The hash tag #Trump2016 is threatening the Democratic power structure by talking to blacks like people and not just #voters. Well done. We're all brothers & sisters. So today, orange is the new black. "You've given Democrats 50 years of loyalty and received what? Take a 4 year chance on a builder." #TrumpInDetroit


Black Twitter aka "the black millennial voter", many have embraced activism, tolerating less than our predecessors. They will VOTE.  They will stand against the Ohio state GOP, who are practicing Black voter suppression in Ohio? I'd like to say yes, but i doubt it. Will the minimum wage really be raised in AZ?: Opponents of a voter initiative raising the state's minimum wage. I've been trying to understand this. How can you be a non-racist conservative when MANY of their laws disenfranchise minorities? I find the idea that you can vote for a party that has been trying to disenfranchise Black people for 70 years and not be part of it is absurd. Stupid purgers. Donald Trump stated that: "I'm smart" for not paying taxes during #DebateNight. One member one vote, yet they block a trade union leader. Surely they'd realize the adverse publicity be counter-productive. Trump also goes on to saying: "I will release my tax returns... when she releases her 33,000 emails that have been deleted." during the first presidential debate. #debatenight. I heard some kids saying that they want to "Vote for Donald Trump and be on the right side of history. Don't let the final nail be put in our coffin." Trump promises 95% of the black vote in his 2nd term. His first term will be spent getting' rid of the other 94%. #Trump2016. Voting allows people to change the conditions of their lives. Basically, if you can't vote, you can't build or change power. I also heard that blacks have zero political influence because they vote solidly Democrat. For the past 50 years, blacks people are  still asking white people to fix their problems. Obama exploited the black vote, and did NOTHING for them. Actually made things worse when he falsely vilified the police.

The right of certain white women to vote didn't significantly impact women of color's lives or material conditions. How can anybody in their right mind Vote for Hillary, she blames a Black man for her crimes she is disgusting. I guess Americans just don't measure up to Hillary's standards after addressing Trump supporters as, "Basket of Deplorables". Trump thinks black Americans are "living in poverty" and dealing with a 59% unemployment rate...They aren't. The huge alt-right portion of Trump's fan base (aka white supremacists aka Stormfront's Finest) are basically a human "DO NOT ENTER" sign. We aren't actually trying to court black voters. We're just assuring white voters that they aren't racist if they vote Republican. Republicans really need to get off their asses, get with the black community, make the case against big government. & ask for their vote.

The last ten Presidential election cycles the highest black vote share for a Republican was 12% for Bob Dole in 1996. Trump has 14.6%. Will Trump be discussing the racial bias lawsuit filed against him in 1972, as a Landlord, as part of his Black Voter Outreach? That's going to be difficult because of the intense hatred and jealousy the Democrats have cultivated in the black community. One of the biggest challenges Trump will have attracting support from black voters is caused by some of his own supporters. Nothing quite attracts minority voters like having a bunch of your online supporters tweeting holocaust oven memes. If Democrats were screwing me like they screw Black folks I would vote for anyone but them. No matter how hard they try to make the process, dedicate the time to register & vote. They don't expect us to. So we will!
Black discoverdior. Getting social network trend Vote