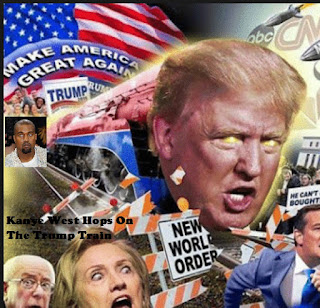 They copy Trump's gestures with his fingers, either rudely pointing, circle his  forefinger and thumb and stretching both arms out as far as they will go. Rapper Kanye West will go down in history as the first African-American rapper to meet with president-elect Donald Trump during his transition. This is a historic moment for Hip-Hop and African-Americans as a whole. In a climate where Donald Trump is constantly being bashed all over the world and on social media, West proves himself as a true leader to be the first rapper to ever walk into the Trump Towers to meet with Donald Trump.

The Hip-Hop community is feeling a bit bamboozled, because it was just a week before the rapper was placed into a mental facility stemming from "Kanye West likened himself to Donald J. Trump at a concert on Saturday in California before tumbling into a 17-minute, free-associative speech addressing radio programmers, MTV, his friends and collaborators Jay Z and Beyoncé, Hillary Clinton, Mark Zuckerberg and more." according to The New York Times. (See article here). Now it's a viral social media trend, and the entire country seem to be outraged. To some this is no different from Jay-Z and Beyonce meeting and partying with the Obama's. Why the double standard?

Immediately in a series of tweets Kanye West explains the conversation he had with the Donald. "I feel it is important to have a direct line of communication with our future President if we truly want change. These issues included bullying, supporting teachers, modernizing curriculum's, and violence in Chicago.I wanted to meet with Trump today to discuss multicultural issues."-Kanye West 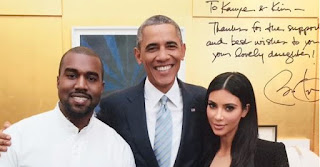 Kanye West hops on the Trump Train. What does this mean for the Hip-Hop community? Will other rappers follow West and jump on the Trump train? Is Kanye West really trying to secure his spot at the 2017 inauguration? I don't understand what the problem is with Kanye speaking to trump. Who else is he suppose to talk about to fix issues in the country? Before you attempt to answer or ask any more questions. Ask yourselves this, If Trump meeting with Kanye is so scandalous, what do you call Kanye West and his wife Kim Kardashian meeting with president Barack Obama? The only real issue here is, being that West is such a famous designer he of all people should have put on a suit and tie for what might just be one of the most important meetings of his career.

Not only has Kanye West meeting with Donald Trump a positive mark in history, but if West successfully performs at the 2017 inauguration he will also go down in history as one of the greatest rappers of all time to perform at one of the biggest events of 2017.