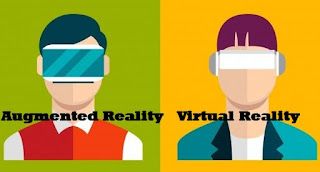 Google glass is a great example, it add to your field of view while still letting you be present in the real world. When it comes to gaming AR allows you to play with other people, because you can see and interact with them. Quite an awesome experience.

Virtual reality ignores the real world and transport you to somewhere else entirely, it immerses you fully into a different world where you can interact with really intuitive peripherals in a totally human way. It seem as if companies are still trying to figure that part out. While VR seems more impressive because you feel as if you're in an entirely different space, there are limitations to not being aware of your surroundings, it's a very singular experience and you have to be in a controlled environment so you don't hurt yourself while trying to move around in the real world while thinking you're in the virtual one.

So which one is better? It all depends on a variety of factors. When it comes to gaming, it probably depends on the game itself. I think that augmented reality might be the best route when playing the Yu-Gi-Oh trading card game or Duel Monsters as well as Pokemon wifi battles. The comfort of the hardware is also a factor, if it's a headset; do you want to wear it for hours through the day? It also depends on the performance of the hardware, of course you want it to look beautiful and as realistic as possible. You also don't want to get sick while using the hardware. It depends on the intuitiveness of the controls, if you're using a mouse with a keyboard, while you have a realistic headset on while your interacting with things; that's going to feel unnatural. Whereas if you have some kind of touch controls or something that you can interact with the world normally, that would make for an incredible experience. It also depends on the software developed for the product, up until now most software developed for AR and AV has been for demo purposes.

But I'm really looking for something that I can spend more time on like a game, video or information that I can use in my everyday life. While it's not safe to say if virtual reality of augmented reality is just a viral social media short term trend, we can only hope that they both make it to commercial success.
Augmented Reality discoverdior. social media trend Virtual Reality