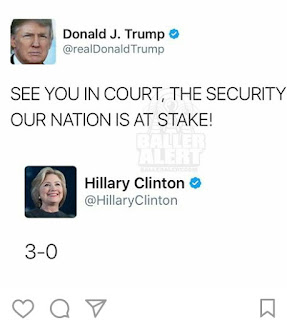 The fact is ALL presidents have used the EO to suit their agendas. What's different about Pres. Trump? Instead of wasting the taxpayer's dime on golf and other pleasure pursuits, he's getting down to business, something he's far more qualified at than you or I. As the story became a viral social media trend online, after Trump tweeted "see you in court". It seems as if some people think it's okay to commit felonies while being an illegal alien. This has zero to do with Trump and everything to do with breaking several laws.

President Trump if necessary let the people vote on a referendum concerning refugees, immigration, and if Judges side with the enemy or against the will of the people, they need to be removed from office. The Muslim Brotherhood is a terrorist organization, the Israelis, British, and several Middle Eastern countries can confirm that. Can you please have them added to the Terrorist organizations list. Obama hired several Muslims that are members of the Muslim Brotherhood to dictate to the FBI what they could and couldn't ask suspected Muslim terrorist.

Obama was never condemned by the liberal supporting mainstream media when he made negative comments about the Supreme Court during one of his State of the Union speeches. Ah, but he is a liberal democrat so it is permitted by the biased mediaIt is happening in other countries just like here. The country is split because of the nwo. The muslim take overs. Obama was a big part and he was not vetted as he should have been. Hillary would of finished the job. Obama was handing us over the the UN.

What might happen next is, as Trump supporters and as people that love America, they may now feel the need to go protest on the courthouse steps!! Last time I checked, judges interpret and apply law, not make or break law. D. Trump won the election, he is the president, it is legal/ the law for him to issue executive orders. The executive must not interfere with the judiciary, but it is ok for the judiciary to interfere with the Executive.