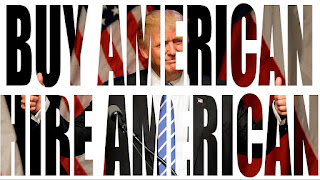 People have trouble realizing that signing an Executive order doesn't change the tags on clothing already made. Trump signed a bill for American made goods- "BUT LOOK, this shirt made 4 years ago is from China!

America has ZERO manufacturing capacity. Trump can't make his products here because there is no one to do it at the level he would require.  Every major American based company manufactures overseas. It has nothing to do with hypocrisy. It simply can't be done. Manufacturing plants are typically 3rd party. Trump can't just pick up and move part of the plant because hundreds of other companies are also using it. This whole transfer back to American manufacturing has to be a collective effort.

President Trump will sign a double-barreled executive order Tuesday that will clamp down on guest worker visas and require agencies to buy more goods and services from U.S. companies and workers.
"Trump will sign the so-called "Buy American, Hire American" executive order during a visit to Snap-On Tools in Kenosha, Wis., Tuesday, said two senior administration officials who briefed reporters on the order Monday." According to USA TODAY.

I think more people would buy "American" if the prices were comparable. In an era where wages are stagnant and the cost of living is only getting more expensive, most people can not afford the luxury of paying extra for American made items when there are cheaper version that are still good quality. Remember under Obama when Disney had American Workers train H-1B workers to take over their jobs? I do! Hundreds of Disney workers were replaced! This is GREAT news. He's cracking down on the INSANE ABUSES of the H-1B Visa program. Remember how Disney fired everybody and brought in non-immigrant workers from India. They even made their employees train the new workers or else they'd lose their severance pay.

I promise, unless their skills are very unique, they are taking jobs that Americans can do. I've seen this lately in the Drug Safety/Pharmacovigilance and Regulatory Affairs areas lately in my line of work. 2-3 year experienced folks with foreign pharmacy or medical degrees. We have that experience here. For those saying his products are made in China. While true you're ignoring the reasons why. Crappy trade deals of the past have made it impossible for American companies to compete. You cannot survive as a company in America trying to go toe to toe with China in cheap manufacturing. With our taxes, regulations and China devaluing their currency then they can't compete. Luckily China has said that they will stop doing that and we will have better trade deals.

That is a concept that seems to be lost on a lot of commenters. Funny thing is even the US work for this type of skills, reviewing and entering cases has mostly been shipped to India as it is because it's so cheap to hire. It's squeezing the market even more. They pay H1-B Visa holders a much lower salary. Making it alot more difficult for US citizens with high tech certification to complete with foreign workers.
buy American executive order hire American Jobs made in USA US economy