HOW TO PLAY Cards Against Humanity - Blog 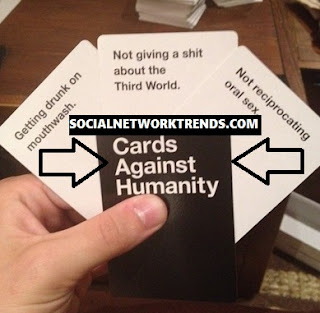 If you are sensitive to political and racial topics, it might not be for you. It's fun to laugh at random phrases that are normally taboo to use. It's like comedy, you know like Chris Rock type stuff.

The game is in no way trying to promote racism or hate of any kind.

One of the favorites I used was Menstrual Rage. The pretty funny phrase, because it's kinda accurate for a lot of women. There are others that may not ever be okay to say in a normal setting, but that's the whole premise of the game. It's pretty amazing, I realize I'm going to be judged as a bad parent for purchasing this game and for not doing more research before giving it to my teenage son. I accept that. However, this game is so funny.


On these cards will be a phrase or question that needs to be answered/completed. This is where white cards come in. An incredible game where players have 10 White Cards, which they use to complete the Black Card's question(s)/blank(s). After each player (besides The Judge) has chosen the best White Card in their hand to go with the Black Card, all players turn their White Cards into The Judge.Uncontrollable laughter. The Judge reviews the White Cards and decides his/her favorite pairing of the White and Black Cards.

HOW TO PLAY:
There are Black Cards and there are White Cards. At the start of the game, every player will draw or be dealt 10 White Cards. Then someone is selected to be the Judge for the first round. ( the rules state it’s the last person who went poo).
The Judge will select a Black Card from the deck of black cards. On these cards, there will be an incomplete phrase or question that needs to be answered.
The Judge will then read off the Black Card and the other players will submit a White Card from their hand to the judge. The White Cards have an answer or response.
After each player (except for The Judge) has submitted the best White Card in their hand to go with the Black Card, The Judge then reads aloud the Black Card along with the White Card of every player.


The Judge then reviews the question and the White Cards and decides his/her favorite pairing of the White and Black Cards. The player who played the Judge's chosen White Card gets an awesome point (and that player holds onto the black card). And the players who submitted a White Card draw another White Card.
Then it’s the next person’s turn to be the Judge and goes clockwise or counterclockwise from there.
I found it’s best to determine and state how many awesome points you want to play too in the beginning to determine the winner.
We usually play to 6 awesome points in groups of 7 to 9 to determine the winner.
But you can make whatever number you like or what is the best number for the size of your group.


The game your party deserves, I am looking forward to purchasing the expansion packs, as everyone had so much fun we now have a once a week game night. It's the A game for 17 years and up.