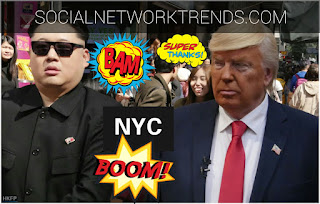 He has accepted an invite from Kim Jong-un after months of threats and violence. Kim might have a nice hotel suite in New York City for him with a young woman or two.  Because everyone knows Donald loves the ladies.

This game has been played by North Korea before. I bet China is up to this. Maybe he has heard how easily manipulated Trump is when complimented and wines and dined. Trump practically swooned during his state visit there. Some say -- we need to talk to North Korea. Kim is not inviting Trump so that he can surrender North Korea's weapons. Kim is inviting Trump to demonstrate that his investment in nuclear and missile capabilities has forced the United States to treat him as an equal. If Kim is nice to the man-child and flatters him, Trump will deem him our new BFF. This has disaster written all over it.


After the President Tweeted "Kim Jong Un talked about denuclearization with the South Korean Representatives, not just a freeze. Also, no missile testing by North Korea during this period of time. Great progress being made but sanctions will remain until an agreement is reached. Meeting being planned!" which suggest that he will walk out with a new Trump Hotel in North Korea and call that a win.

Thanks, Moon Jae-in and South Korea, something we can agree on Jacob, South Korea deserves the Nobel peace prize if this works.