June 19, 2018
81% Percent of Millennials are on Twitter - [Infographic] SocialNetworkTrends 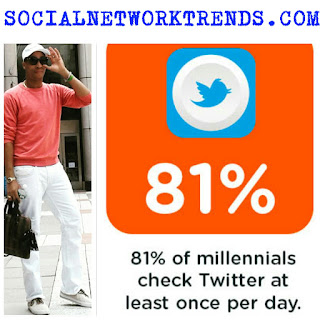 Based on Twitter statistics and user demographics in 2018 "Thirty-six percent of Americans aged 18 to 29 years old use Twitter, more than any other age group. Usage drops as age increases, with 22 percent of those aged 30 to 49 using the service, 18 percent of 50- to 64-year-olds, and just 6 percent of those aged 65 and up. Twitter itself says that 80 percent of its users are “affluent millennials.” according to Hoodsuite. Here's your reminder that it's OK to scroll on by the current atrocities, or to stay off Twitter entirely, for the sake of your mental health.


I’m gonna have to turn Twitter off for my mental health. It’s all too much. It is as debilitating to marinate in rage at Trump as it is to be marinated in Trump’s rage.

Hey Twitter; we could really use a edit button for typos. I use FB for families -Twitter for books Linkedin - almost give up.. although have 9.5k connections -Instagram-for the sake of being there.. I stop blogging a long time ago... after my web designer wiped out my visitors from 200k to just 1k. Thank you!
In a blog titled "40 Essential Social Media Marketing Statistics for 2018" reveal that "81% of millennials check Twitter at least once per day. Tweets with images receive 18% more clicks than tweets without images."

Just want to say thank you to everyone on Twitter trying to to good. Those unafraid to use their voices. Those coming together, those there for each other and organizing - raising money for those in need. Plenty of bad things about Twitter but there’s also an awful lot of good.

100,000 people say they will march in opposition to the brutal campaign Trump, Sessions and Nielsen are waging against these little children. 100,000 since just 10:00 a.m. yesterday — and that’s just how many millennials who uses Twitter!

FYI: I use Twitter for business or dating purposes. I discuss sports, take small political stances, and brag about my daughter. I’m interested in dating, networking, or otherwise. I don’t DM. Twitter is my small escape from real life.