Why Apple is Worth $1 Trillion - Network Value - SocialNetworkTrends.com

Apple is the 1st trillion-dollar American company. Because in comparison’s sake, Amazon is worth $877 billion, Alphabet $851 billion and Microsoft $822 billion. If Apple was a country It now ranks 16. There are only 15 countries whose GDP is more than Apples market cap of $ 1.016 Trillion. 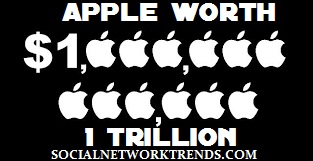 In the era of absolutely unrealistic and runaway valuation (both at IPO and ongoing) we really need a better understanding among both journalists and general public of what market cap means versus gross revenue/net revenue/coh/assets/etc. Even ignoring the inevitable market correction, Apple isn’t going to stay on this trajectory. They haven’t a clue what to do to keep growing.

The following quote from the WSJ suggests,

“Apple’s ascent Thursday to become the first U.S.-listed company to reach $1 trillion in stock-market value is worth celebrating as a capitalist success whether or not you own the stock or an iPhone. Thanks to human ingenuity, technological breakthroughs and smart management, a single firm has enhanced the wealth and well-being of millions in a way government never could.” 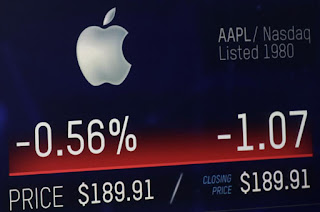 I couldn’t have said it any better than that. The quote also support the findings that, buybacks are bad news because they do nothing for the economy, but do boost executive compensation and increase the stock price. One thing they allow companies to is boost "earnings per share" even if their revenues are flat. It's basically an economic fiction, a sign that companies can "make money" by playing with market definitions rather than actually investing in workers and products.

I think iPhone has gotten stale, but it could also be they've got a critical mass from it that could keep them going. They might say “it’s worth x” in reality it’s worth whatever someone else would pay. Obviously I (maybe you have better means ;)) can’t imagine owning a company worth 1 Trillion dollars but if a shareholder owned 20% and wanted to sell she’d have to find buyers and the chances are price would decline as she sold shares -she wouldn’t find a buyer for the entire bloc of shares at the current Apple price. We certainly didn't need to cut the corporate tax rate for this.

Apple has gained more than 20% so far this year--and 8.8% during the first two days of August--but still doesn't look expensive. It trades at 17.6 times earnings forecasts, just a touch higher than the S&P 500's 17.5 times."

I have this theory that's completely unfounded, the only real difference in Apple reaching the 1T mark is that while Amazon has more of a concentration of its shares in its founder, Apple has a more distributed set of shareholders among other billionaires and multi-millionaires. I also believe a lot of journalists use Apple products, so there's some attention bias in reporting on Apple that creates a virtuous cycle of reporting-valuation increase-reporting, etc. The tax revenue on Apple’s repatriated money will generate $34B which is $34B more than was generated under the old tax bill.

Never fear, that new revenue will do exactly nothing because as the article point out it’s already been spent a dozen times over just this year. Factor in the sensationalism of a company valuating at $1T, well by God there's a story in there.

There is no reason to over-explain it. Stock buybacks are a great way to increase executive compensation and the market rewards them for it. That's what happens when a company elevates the stock price metric above all other aspects of their business. It's not unique to Apple by any means, just a function of how labor and investment are degraded in relation to market numbers.
apple net worth