Why Baby Boomers Get Blamed For A Broken America? - Social Network Trends 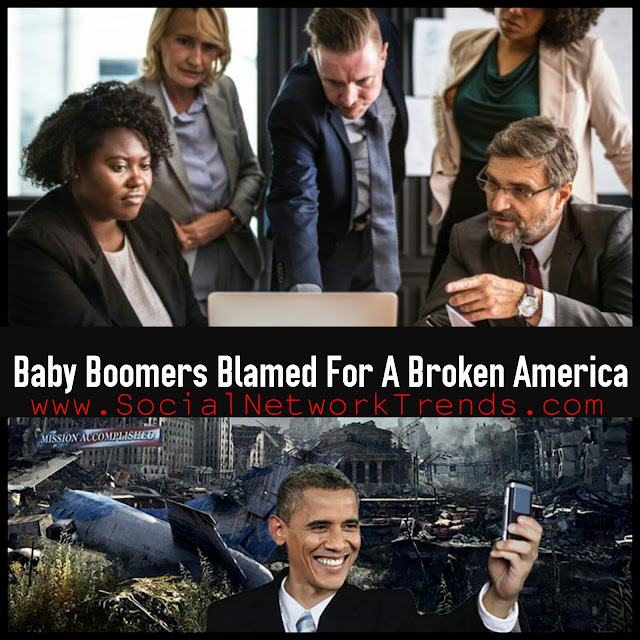 Blame Baby Boomers For A Broken America - Baby boomers have ruined America by siding with the Democrats.

Every time you hear someone blame Millennials for living at home still with their parents, when a news organization mocks a newly elected congress woman for not being able to afford rent in D.C., or even when high school kids are attacked for not wanting to be killed by guns in school and told they don't understand the subject and are dismissed with stupid lines like "they eat tide pods, what do they know anyway?" Remember who is pushing those narratives.  Its baby boomers and its getting old.  Its past time to lay the the responsibility for this country's issues at their feet.

In an article published in Time, titled "How Baby Boomers Broke America"


"Lately, most Americans, regardless of their political leanings, have been asking themselves some version of the same question: How did we get here?"


We've been saying this for a while. The greed, lack of empathy, and self centered nature of their world view is clearly why we're here.


The result is a new, divided America. On one side are the protected few – the winners – who don’t need government for much and even have a stake in sabotaging the government’s responsibility to all of its citizens.

For them, the new, broken America works fine, at least in the short term. An understaffed IRS is a plus for people most likely to be the target of audits. Underfunded customer service at the Social Security Administration is irrelevant to those not living week to week, waiting for their checks.

Except for the most civic-minded among them, corporate executives are not likely to worry that their government doesn’t produce a comprehensive budget. They don’t worry about the straitjacket their government faces in recruiting and rewarding talent or in training or dismissing the untalented because of a broken civil-service system.

Civil service is another great American reform that in the last 50 years has become a great American moat, protecting incompetent or corrupt workers, like those who supervised the Veterans Affairs hospitals where patient waiting lists were found to have been falsified." - TIME

Still don't believe it? Just ask yourself why a group of adults that had every advantage to succeed in America blame Millennials (their kids) for a crashed economy, out of control student loans, and historic income inequality.

I always vote. There has been a severe lack of under voting for far too long.  But lets have some persepctive.   Civics is not being taught in schools in the same manner it was in the past.  I find a direct correlation with a lack of civil engagement with the decreases in education across the board.

There is plent of reason to believe this is in part to the mindset of the baby boomers in charge.

"This is not to say that all is rotten in the United States. There are more opportunities available today for women, nonwhites and other minorities than ever.

There are miracles happening daily in the nation’s laboratories, on the campuses of its world-class colleges and universities, in the offices of companies creating software for robots and medical diagnostics, in concert halls and on Broadway stages, and at joyous ceremonies swearing in proud new citizens." TIME

So if you don't instill the value and build understanding of why voting is important you get what we've gotten.  But after this week's record midterm turnout its promising that voter engagement will be up for the foreseeable future.

I'm certainly not complaining.  I'm making an observation that needs to be made by everyone so we won't repeat the same mistakes.

Conclusion -
So yes, its a fair and objective to conclude the baby boomers are responsible for where we're at as a country right now.  If not them, who else can we blame because they're in control.  But not for long. I more or else blame the Reagan Generation, corporate greed spiraled out of control and became the new ‘normal’ for running businesses.
Baby Boomers economy