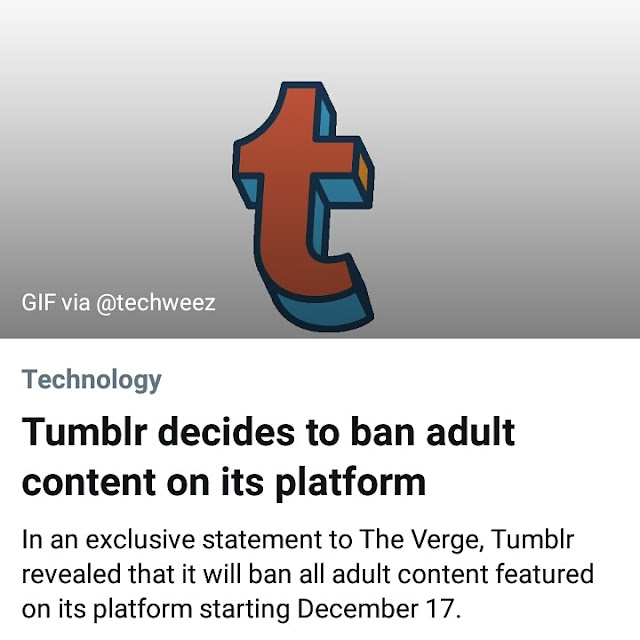 Congratulations to Tumblr, on taking a stand against the only thing people still go on the social media website for. Yes it's true, Tumblr is banning adult content on its platform on December 17 and Millennials are big mad over it:
@SocialNetworkingTrends | Social Network Trends 2018 -

"Tumblr will ban adult content from the platform starting Dec. 17, the company announced. This includes photos, illustrations, videos and GIFs of sexual acts, as well as full-frontal genitalia and female-presenting nipples. This change will also get rid of Tumblr’s Safe Mode, the search filter designed to purge NSFW content from a query." According to an article published by Polygon


The Negative Effects of The Tumblr Purge

I remember when AOL banned all mention of "breasts" which ended both the Breast Cancer Survivor's Group and deleted every last chicken breast recipe. You couldn't even say you were keeping abreast of the news on AOL. No one ever learns, do they?

It's going to effect a lot of artists. Tumblr was the go to for alternative art, especially for younger LGBT folk. A very poor business decision tumblr's bottom line will soon regret.
social media Tumblr Ban