Buzzfeed printed social network 'Momo Challenge' trend out on to  their very first newspaper - Do you think buzzfeed using momo on their magazine cover is insensitive? 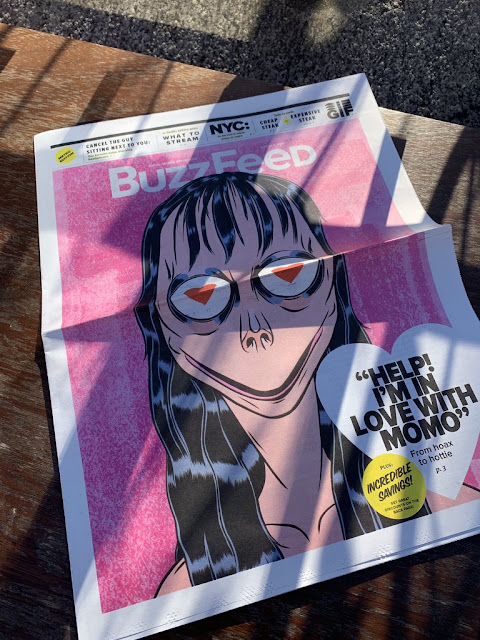 So far the BuzzFeed newspaper seems to be a big hit among the Millennial  "employees at other digital media companies" demographic.

Soooo...Buzzfeed is now publishing newspapers? And momo is on the front page???

Let's start with some background information.

"BuzzFeed, Inc. is an American Internet media, news and entertainment company with a focus on digital media; it is based in New York City. BuzzFeed was founded in 2006 by Jonah Peretti and John S. Johnson III, to focus on tracking viral content. Wikipedia


The original sculpture was created for a group show at a gallery in Ginza the specializes in subversive art so Aizawa intentionally dialed up the scariness.

Says he started receiving hate mail from all over the world. At its peak he was getting 30 emails a day.


1. The NYC local knowledge page is so spot on. I wish someone had handed me that when I first moved to this city.

"BuzzFeed’s paper play comes after the company recently laid off about 15 percent of its workforce. CEO Jonah Peretti said at the time that the cuts were necessary to put the company on a “firm foundation.”


Following the layoffs, BuzzFeed was expected to bolster other parts of its company, including commerce, and is currently hiring for a number of editorial positions, many of them in the video department."


2. The self-deprecation note fits nicely with the Momo content.
Everyone: don't post that momo pic some people have anxiety and get scared easily
Buzzfeed: so ur saying we should put it on our front cover??

"With a cover teasing a story on the Momo Challenge, the paper also includes instructions on cooking cheap and expensive steaks as well as a gif of Glenn Close at the Oscars, providing snapshots of her hilarious reaction as she checked out Billy Porter’s red carpet outfit." - (Adweek)


We cannot believe that buzzfeed published a newspaper that had a section dedicated to momo with the subtitle “from horror coax to hottie” - However, after getting all of the facts, we discovered that the sculpture was created years ago, for a gallery. People are quick to crucify someone for something they don't even bother to do research on.