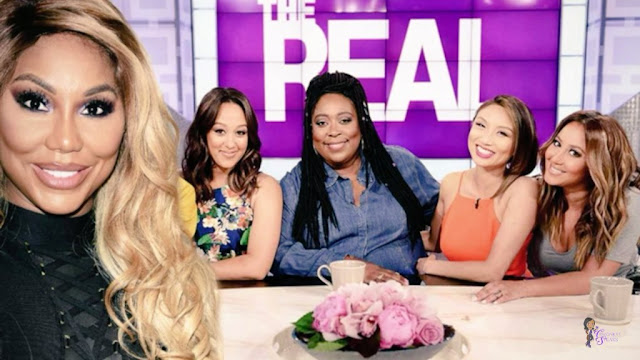 Here's Are Some Interesting Facts' Why Tamar Braxton Is Feuding With The Real On Social! - (Social Network Trends) -


By: MIKE VULPO Enews - "UPDATE: Tamar Braxton is addressing the ladies of The Real once again.


In a series of tweets  and Instagram posts Thursday morning, the singer and actress addressed the headlines made from yesterday's talk shows. "I'm feeling defeated. All my hard work & from one question, went down the drain. I'm just tired of it.

I have so many positive amazing television shows coming and music and this is always the focus. I honestly don't want to discuss them nor talk to or about them," she wrote on Twitter. "Wendy cleared the air in PRIVATE then came on her show & it was positive! They don't want that.


They want MORE drama and here I am today mad and depressed because I allowed myself to engage with them on negativity when all I've been wrkn so hrs on positivity and love." Tamar added, "[Loni] has done a lot and I've been silent. I don't know what the constant attack is on me. I don't know." ————

The ladies in daytime are keeping it real!

It's been more than three years since news broke that Tamar Braxton would not be reprising her role as a co-host on The Real.

In the months that followed, reports surfaced claiming her sudden departure may have been caused by conflict with her fellow co-hosts at the time. But over the summer, things appeared to be healed when Tamar issued a public apology on social media.

"When all u know and felt is hurt. You hurt. Self-inflicted and to others are included. From my sisters, the ladies of The Real, Iyanla Vanzant, old and new friends and whomever else I've EVER hurt, from being hurt.

Please forgive me," she shared in a now-deleted Instagram. "I don't know love to show you love. Now I do thanks to my @David.Adefeo." Sounds nice, right? Ultimately, things took a turn today when Tamar appeared on The Wendy Williams Show."


"Would you ever go back to The Real?" #WendyWilliams asked her guest and close friend. "I always ask you this. Cute show, but they need you. You were done dirty." Who's side are y'all on Tamar or The Real?


What are your thoughts on the Tamar Braxton Realness? Do you think she need to visit "The Real"?