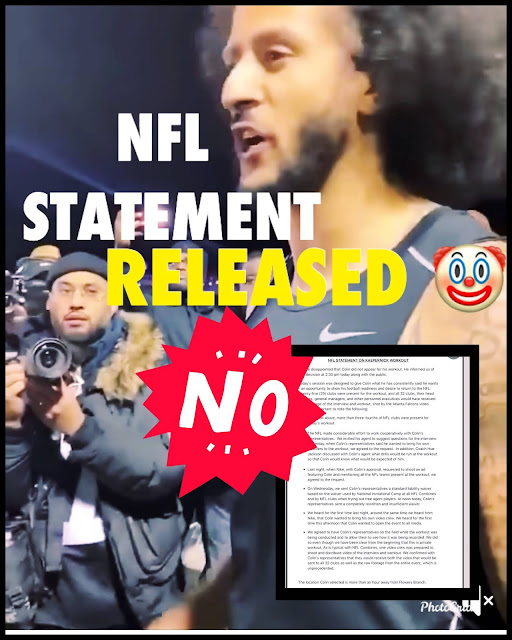 The NFL release a statement about Colin Keapernick’s controversial workout here on the web at Social Network Trends!!

After Keapernick shared some words after his workout in front of the NFL + thanked everyone who’s been supporting him! Moving forward, the NFL released a statement about all the details leading up to the failure of what the deal is today!

In this statement they said “Colin's decision has no effect on his status in the League. He remains an unrestricted free agent eligible to sign with any club.“


The funny thing 90 percent of the viewers sport broadcaster, owners called it a sham now other people like big mouth Stephan A Smith wants to bad mouth.notice this when he signed his multi million dollar contract, bet he had his lawyer to verify his contract, Colin just a smart men whom can think on his own haven't heard of Stephen A doing anything for the communityDue to their history with Kap, smell BS?


To conclude, He messed up yesterday moving the location of his workout. He needs to work with in the system. It’s an honor to play for the NFL.. get the chip off his shoulders.
Colin Keapernick nfl letter