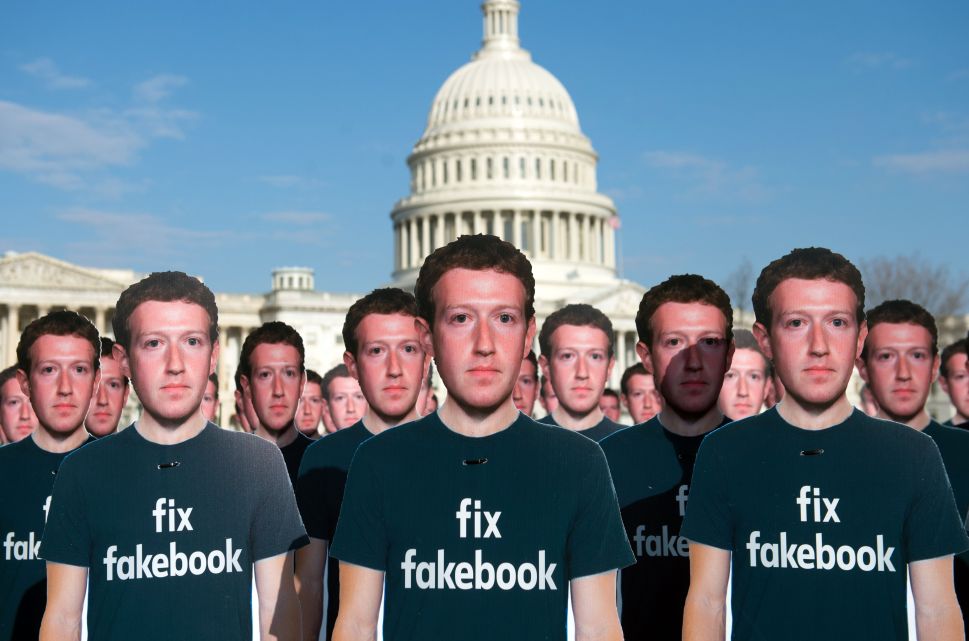 One hundred cardboard cutouts of Facebook founder and CEO Mark Zuckerberg stand outside the US Capitol in Washington, DC, April 10, 2018. SAUL LOEB/AFP via Getty Images

Late Wednesday night, after police had cleared protestors from the Capital ground to allow Congress to resume vote counting and certifying election results, Musk tweeted a meme showing bricks lining up like dominoes. The smallest front brick was labeled “a website to rate women on campus”—a reference to the early version of Facebook—and the largest tile in the back was superimposed with a tweet by The New York Times Magazine correspondent Mark Leibovich that read: “The Capitol seems to be under the control of a man in a viking hat.”

His message was clear: The shocking rampage on Wednesday was the culmination of years of political and ideological polarization fueled by social media platforms, primarily Facebook. “This is called the domino effect,” Musk tweeted alongside the meme. 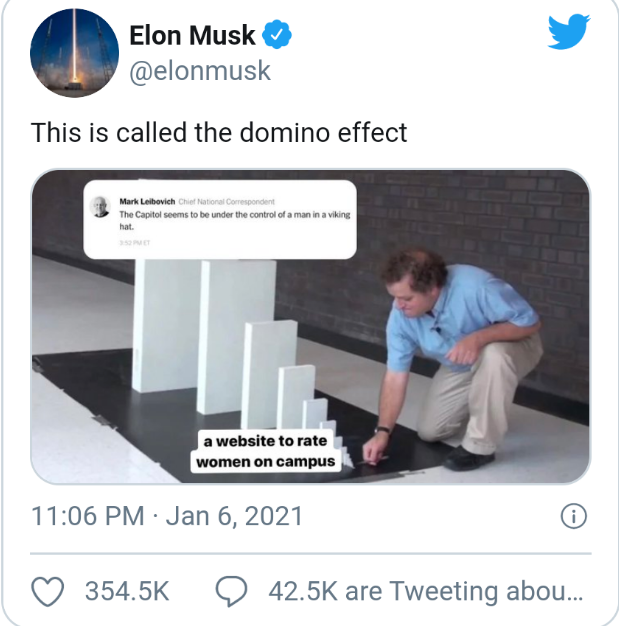 It’s not the first time the Tesla CEO openly expressed his dislike for Facebook.

In February, he called Facebook “lame” in a tweet and urged people to delete their accounts. Three months later, he tweeted “Facebook sucks” after the company’s artificial intelligence lead criticized his lack of knowledge about A.I.

On Wednesday night, Facebook removed a video released earlier in the day of President Trump spouting claims of election fraud. The platform also blocked the president from posting content for 24 hours, then extended it for at least two weeks, and perhaps indefinitely. Twitter blocked Trump’s account for 12 hours.

Several big tech CEOs have publicly condemned the violence during the protest. In a staff memo, Google CEO Sundar Pichai called it the “antithesis of democracy.” Apple’s Tim Cook said that “those responsible for this insurrection should be held to account.” And Facebook CEO Mark Zuckerberg called the event “a dark moment in our nation’s history” in a letter to employees.

Zuckerberg’s decision to suspend Trump came after years of allegations that Facebook has been soft on Trump and that it has programmed its algorithm to prioritize right-wing media outlets and personalities. It has also received heat for providing a platform for the extremist groups responsible for the riots on Wednesday. In addition to using Facebook to grow their influence, the rioters have coordinated attacks on the site, including planning the attack via publicly viewable groups and events that were still up on Facebook on Wednesday night.