Bye Felicia: Who is this Felicia? 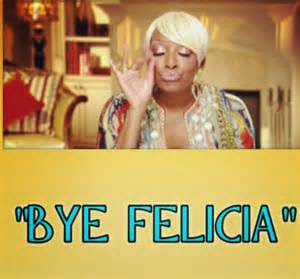 It originated from the hit movie Friday. There is a character Felicia(a local crack head ) would come by and constantly ask Craig for everything he had. The trend has formulated into a show Bye Felicia on VH1 and now it is trending online as a way to say "See you later" or "Good bye" the kids now say Bye Felicia.