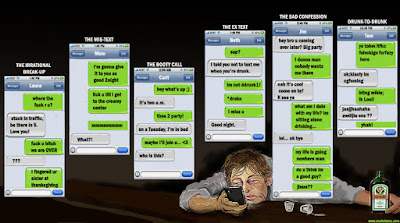 Texting while driving causes more accidents than drunk drivers and according to Caranddriver.com "Previous academic studies—much more scientific than ours—conducted in vehicle simulators have shown that texting while driving impairs the driver’s abilities. The leading causes of car accident deaths: sleeping at the wheel, drunk driving, texting while driving". Be careful out there folks. Don't bother texting me while you are drunk. I'd rather not have conversations when you are not going to remember it in the morning. Well I have officially moved on from drunk texting people and now I just drunk email them instead. Right now my friends are probably currently drunk texting their ex's, wiping jäger off their top, dabbing or eating a kebab. I've created the hashtag #ThingsIWantSiriToSay on twitter.com/discoverdior with hopes that she would say, "I prevented you from drunk texting your ex last night". What's worse than texting people while drunk or better yet what's worse than drunk texting your ex? Sending them a drunk video. Forget drunk texting - I am now setting the trend for drunk face timing cringe. You know you're a pro at drunk texting when you don't even remember sending any messages the night before but everything makes perfect sense. Me texting when I'm sleepy is more dangerous than me texting while drunk. Late night drunk texting is a thing of the past, so I've started the trend: early morning still-not-sober texting! It's safe to say I'm more than likely still pretty drunk.

I think drunk Instagram commenting is way worse than drunk texting but not as bad as drunk tindering. I think the new trend isn't drunk tweeting or texting.. but drinking and then putting dumbass shit on your SnapChat my story. Is getting drunk on the weekend and texting a girl you love them the new trend? Sleep texting is dangerous too, not as bad as drunk texting though. Drunk Tweeting is a viral social media trend that is almost as bad as drunk texting but not as many consequences to deal with in the morning. I felt nauseous all day and I really want to sleep but someone is texting me drunk and I just want them to get home safe. Drunk texting is probably one of the worst things ever,safe to say I will never be able to look at a few people the same. To all the people I've been drunk texting, I haven't been able to apologize because I drunkenly broke my phone.. noticing a trend here.
discoverdior. Drunk social network trend Texting trend