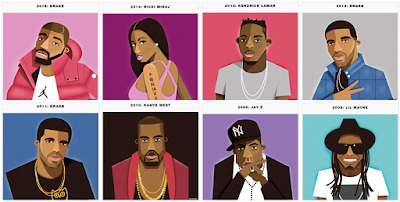 Some of these rappers should just let PR handle their social media. It seems to be the number one career killer. Focus on bars, not tweets. I will never in life understand why rappers or any celebrities argue with people on social media.

About a year ago, there was actually a Twitter debate where people argued Meek Mill was a better rapper than Drake... Ever since Drake called Meek Mill "Twitter fingers", Meek's stayed off Twitter. The artists/rappers that talk the most smack on social media, acting like they're "nice" are trash. lmao .. stick to your day job. Last time there was Taylor Twitter beef, her and Nicki Minaj performed together. It's hard to tell what's a stunt and what's real anymore.  I was like social media, you have to give me something better than a Nicki Minaj vs Perez Hilton Twitter beef! Nobody has time for that. Now it's a viral social media trend.

The rap scene is weird right now you have rappers who don't even rap, beefing with rappers and incriminating themselves on Twitter with threats. Following rappers on social media is cool and all, until they start retweeting EVERYTHING anyone @ them in. If I could hack one celebrity, I'm definitely hacking Nicki Minaj and starting a Twitter beef between her, Lil Kim, and Remy Ma. Maybe Foxy too. It's certain rappers that fell off so hard they should be able to respond to their fans on social media.

I'm watching you all Twitter beef and I just can't believe you're entertaining a beached Whale and a Lil Wayne look alike. Like they are petty, Bruno Mars vs. Ed Sheeran, Meek Mill vs. Drake, Nicki Minaj vs. Taylor Swift, Lil Wayne vs. Rich Gang. When will it end? However the Pusha T vs Lil Wayne beef is one of the most exciting things I got to experience on Twitter. I don't see how you can call someone your favorite rapper when they're on twitter 24/7 beefing with fans and other rappers and they are local. Rappers are so corny when it comes to beefing on Twitter. They @ the person then delete the tweets. like what's the point?
blog discoverdior Rappers Rappers On Social Media social media social network trend