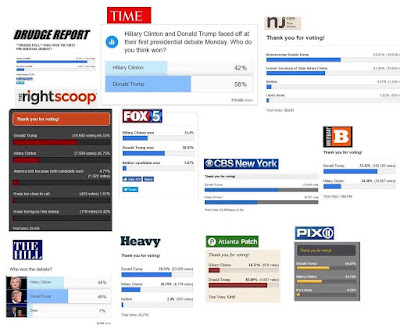 CNBC Debate Night poll reveals over 400,000 votes. Trump 61%, Clinton 39%. Hillary's check is in the mail? Was Lester Holt the third debater? Trump wins on ISIS by pointing out Hillary never repudiated the U.S. withdrawal from Iraq. Lester Holt grilled Trump on stop/frisk, birther issue, comments on women, bankruptcies, and tax returns!
What did he ask Hillary? How come CNN says Hillary won on their poll, but on every other polls Donald Trump wins by a landslide? As for the debate. I thought Hillary was acting Presidential. I thought Trump was Presidential as well.

Lester Holt was a DISGRACE to journalism, became "Crooked Hillary's" SURROGATE to protect HIS leader. OBVIOUS corrupt media, Trump wins. Do you think Lester Holt was biased in the debate? (Please share after voting so we get a big poll sample). Stop and frisk is NOT unconstitutional.  Rudy said Lester lied and had no right doing that. Trump was totally accurate! Nothing on emails. Nothing on the corrupt Clinton Foundation. And nothing on Benghazi. AS PEOPLE think about the debate they will be endeared to Trump knowing Lester was paid off and so were the Hillary answers. HRC in action. A few examples of Hillary corruption. She smiles and tries to demonize Trump knowing Lester is paid off and she has questions rehearsed. When the 'moderator' jumps in, protecting one side while they lie, it's not a debate.
It's a roast. We won't pretend otherwise.