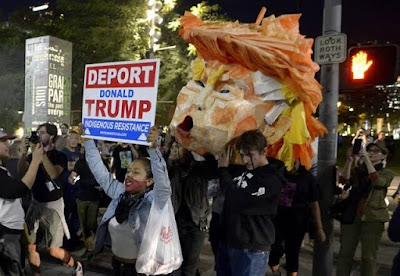 Hillary "supporters" are the MOST angry, hate-mongering, disturbed people. They've proven they're violent and it could get ugly. See children. This is why the working class voted for Trump! Those violent protesters are Hillary supporters. The bad news about this is after Trumps victory  many of those will be rioting. The good news is Trump will take care of them strongly.

These Hillary people are extremely violent. They claim to be against Trump because he's "divisive" and "mean" and yet attack Trump and his supporters. Wait 'til you see what they do, from election day on! Just watch. Civil War coming...guaranteed. Her supporters are so violent. This is the result of Hillary's Divisiveness and hate. The media lied all year about Trump supporters being violent. THIS is the shocking reality. Now it's a viral social media trend. The thoroughly descriptive violent idealization of death wishes against Trump by Hillary supporters candidates is truly SICK. Wow!!! So, technically, Trump supporters were supposed to stay home on Nov. 8th, so Hillary could win? Because, for them to get this riotous is a way of saying their votes for Hillary matter more than the votes for any other candidate. And that's assuming they actually got out there in the cold to vote for her. I think they were so confident that on election day, Hillary would sweep that election clean. After all, she was the media's favorite of the two and the projected winner by a landslide. So, many of them stayed home. Unfortunately, it backfired. And now, they can't handle it.

This only proves Trump was the right choice. Those that love this country won this election. We are sick of athletes taking a knee during the national anthem, "celebrities" inciting anarchy, the media forfeiting integrity for ratings and political agendas, hate groups perpetrating violence over false narratives, and anti-Americans burning/stomping on flags. Want to blame someone for your loss? Take a look in the mirror. You are what united this nation to come against your wicked ways. We are not equally divided, we are equally united with two different causes. Good over evil won this election. Right over wrong prevailed. Either suck it up and get onboard with making this nation great again, or get behind us all together... we ARE moving forward!