First it was Ivanka, then Barron and now trailer park trash comedian Chelsea Handler bashed Melania Trump for "not being able to speak English". Enough is enough, now celebrities are bullying the Trump Family?

I never heard of Chelsea Handler, I am guessing she speaks English and perhaps several other languages also, and that is why she thinks she has the right to trash the first Lady of the United States? 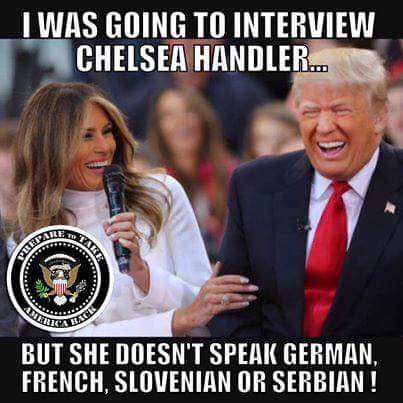 When was the last time Chelsea Handler was relevant....Never!!!! So she has to make fun of the Trumps because that's the in thing to do. It's a viral social media Trump trend. That's like hating most people who can't speak English.

Garbage talk coming from trash. The Hollywood court jesters are losing their power and they know it. Our new President is not impressed by them and they can't stand it.


As a proud Trump, Hillary Clinton and Obama supporter, I do NOT hate someone because they don't speak English. Never have, never will. Dear Barron, I'm sorry that there are people in your country that are total morons!!

Before Donald Trump had been sworn in hatred began to spread onto his family members. In December, "Someone allegedly harassed Trump's eldest daughter and her husband on board a flight." According to CNN.


Right after that the trolls on social media began attacking Trump's youngest son Barron. You are just a kid put in a very difficult position that most adults couldn't handle you're a good boy! I wish only the best for you.


So according to People "The White House issued a statement on Tuesday asking for privacy for President Donald Trump‘s children. The plea comes after people made cruel comments on social media about Trump’s 10-year-old son, Barron, following the president’s inauguration on Friday."

Trump fans lost it on social media over bad joke tweet by SNL writer and demanded firing.  I'm not, very happy. What kind of person attacks a child. SNL is extremely bad, and I wish Mad TV still existed and all the moronic liberals thought it was prestige satire (which it absolutely was).

And then it happened, "You're suspended! SNL writer benched after posting offensive tweet about Barron Trump." according to Fox&Friends.


I'm sorry that there is a society of morons in this country that don't know the difference between a handicap and exhaustion, that are hellbent on ridiculing you. The words and disgusting things people are saying is so downgrading. I'm so ashamed that Chandler shamed Melania.

Since this election I've realized people have been hiding such awful things and it all comes out now. This election has shown us the real truth in people and how they hide behind fake ways.


Bullying is only a reflection of their character and not yours. Barron is a child who needs to be out of the limelight and to be at home, whichever one it may be, to be comfortable and playing with friends.


I hope that Melania follows in the footsteps of Jackie Kennedy and Hillary and Michelle Obama who kept their children TOTALLY out of sight from the public.
Bullying the Trump Family