Letter To The NFL - Re: #NFLShutDown 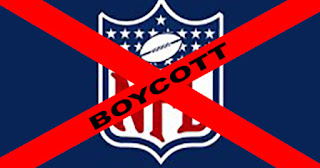 
The league should be dismantled. Fire the entire team. You've lowered your standards. Unpatriotic - Blatant disregard. Allowing players to kneel displayed a lack of disrespect towards the American flag, the American people and to the American heroes of the Military and Armed Forces.

Fans spend top dollar to purchase NFL products - clothing, memorabilia, tickets and online streaming service subscriptions. We follow you on social media. And now we're disappointed in the NFL for allowing this to happen while America watched as the disrespect was shown throughout numerous games on NFL networks.

Football Sunday will never be the same as sports fans now have to choose between watching a sporting match upstaged by political issues, personal beliefs and silent protests.


Society and the news media have saturated the market with politics, personal and political issues, government scandals and their own hatred towards the presidency the president and the fact that Hillary Clinton lost the last presidential election.

When buying a ticket to a football or basketball game we purchase these tickets with the intent to be entertained by professional athletes who are dedicated to the sport. There's a time and place for everything politics does not belong on the field. It's all about tradition and NFL athletes have broken tradition by kneeling during the national anthem. Enough is enough.

They removed statues, they broke down monuments and now they disrespect the flag and the national anthem. What's next, how much further will they continue to destroy American values?
football football league NFL shut down