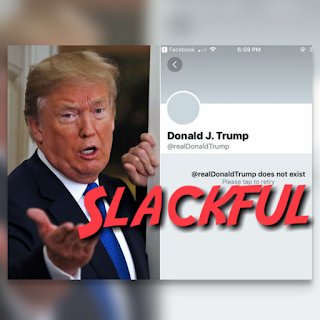 Twitter has to bring criminal charges against the now ex employee...this can't go unanswered. So any Silicon Valley employee could slackfully disrupt service or disseminate private info if he doesn’t like your politics? Yet Isis can post propaganda videos on SM at will. This is what Twitter has admitted publically. I wonder if this is a security concern that could effect investor confidence?

According to Twitter "Trump’s Twitter account was temporarily shut down by an employee on their last day". ESPN Calls Twitter employee who deleted Trump’s account a ‘HERO’. They probably know where we are? IP addresses. Phone tracks NSA. A low level Twitter employee should not have had ability to end Trump's acct. Inadvertently?  Of all the millions of tweeter accounts. POTUS gets deleted. Wow Pres. Trump should buy a lottery ticket. Their system must be very loose and slipshod. We are fully aware of the snoopy privacy violating gov agencies but I was referring to the Twitter standard customer service agents.

Online Security at Twitter is non-existent or they encouraged the ex employee! Which is it? Terrorists & pedophiles seem to be protected. Why aren't their accounts being deactivated if its so easy? DISTURBING! When a low-level flunky cyberpunk can do this, who knows what other magical powers they have. Hello 1984. Twitter's propaganda arm of the DNC. They promoted the anti-trump hate rallies, before he took office. They hid positive stories. If some random Twitter support staff can disable the President’s account, what can they do to the rest of us?