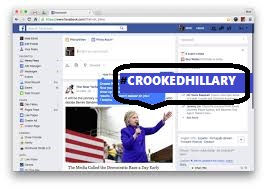 By using algorithms to decide what does or doesn't get shown in your Newsfeed, is one way of how Facebook will tweak your timeline. The social network should continue to let people choose their own content. Facebook is what you make it. To me; it's a place to keep a lot of my pictures and memories it's a way to keep in touch with my family and friends. Others may use social media to bully and bash people or seek attention; that's when you know you have issues.

"The company has been testing out a new type of timeline,”Explore Feed,” which it's in the process of rolling out to users across the world. Unlike your main feed, this one contains posts from people and outlets you don't follow that Facebook's algorithms have determined you may be interested in seeing." According to (QZ.) How about tweaking our timeline in chronological order and keep them that way. I hate when I see something I might be interested in, and Facebook decides to jump to the top making what I was looking for at that time even more difficult.

I'm tired of Mark Zuckerberg doing social experiments on users of this platform; if he is interested in our having a good experience here he'd had allowed us to decide who and what we prefer seeing in our news feed this most recent decision by Facebook's Max of an overage to limit and control users social encounters. Liberals wanted to censor users? go figure only they are allowed freedom of speech. Facebook should protect Americans and other people in the world. It should not allow Russians to intervene with American elections or vice versa. At the end of the day, it's really not Facebook's business what I post. I love the other features where you're allowed to text in the instant message or the messenger but I dislike the fact that you have to download Facebook Messenger on a separate app allowing your phone to take a whole lot more space.

I've noticed a lot of things that I was following have disappeared completely, this can't be legal in my opinion. Like algorithms that suppresses who can see your comments and posts like the limited post that don't fit your agenda like when KTLA deleted my comments that were simply historical data that didn't favor liberals. No big surprise here as liberals don't like facts. Facebook needs to stop working on tweaking what I see by the use of algorithms, and give me settings to let me choose what I see.

How do they know how to make my feed meaningful.I thought that Facebook was originally intended as a place where friends connect, but then the progressive took it over and it became a soapbox for the Democrats. Hey Facebook; changing the algorithms doesn't always fare well with everyone; keep on forcing changes and you'll be faceless.  I keep seeing the word meaningful; in quotes, I guess that's the excuse they're going to give for making and keeping people from seeing pages they follow. Including should be an actual news site unless the page pays to promote every single individual post; just let me put the post in chronological order and keep them that way all posts that I subscribe to. Why can't that be an option? If this is a problem now imagine the world with Land advanced technology. My Facebook is on point; I only see meaningful things in my feed right now. Soon Facebook is going to be a thing of the past like Myspace finally became. Which is owned by a celebrity - Justin Timberlake or something.

Now, this slight control mess they keep trying to figure out these days come up with other issues they themselves create. Facebook will play out just like anything else sooner or later. When I personally take the time to click on feeds then click on the recent it means I want to see chronological order. That's why I personally and click on the subscribe button. Why are you taking away my personal choices Facebook? Maybe I just want to see some nonsense celebrities my PJs at home alone. Why are people obsessed with controlling someone else's entertainment that is now a serious breeding ground for people who have no business having an opinion or access to the internet.
facebook updates How Facebook is Tweaking Your Timeline? This is how facebook tweak your timeline timelines on facebook