Find out why Serena Williams downplayed French Open catsuit ban.... The 23-time Grand Slam champion responded to part of the reason she wore the catsuit at the French Open. 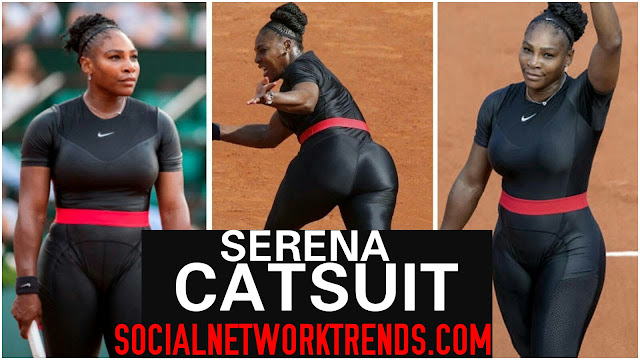 This sexist, racist provincialism directed against Serena can be simply resolved.

While some people on social media think that, this is not about racism, this is about Serena thinking she's special because she's so good. - She's gonna wear PANTS! This is NOT GOOD SPORTSPMANSHIP Its clearly a woman trying to draw attention to herself and make a fashion statement. "Hey everybody look at ME!"

In an article published on (USA Today) - "In an interview in Tennis Magazine's 500th edition, French Tennis Federation President Bernard Giudicelli said the French Open will institute a dress code to regulate players' uniforms because, "I think that sometimes we've gone too far."

MORE: Andy Murray is realistic about his chances of winning U.S. Open

And then he singled out the figure-hugging black suit that Williams wore this year at Roland Garros and said made her feel like a superhero". USA Today

So they test her randomly whenever they want the most out of any other athlete in the sport and now they want to check her outfits. Next it will be her hair. So covered from neck to toe is inappropriate but short skimpy skirt is dress code?

American sports media should and can immediately stop recognizing the French Open as part of the tennis “Grand Slam.” And players of both genders should decline to play.

I remember all the up-skirt pictures middle-aged male photogs would proudly sell of a teenaged Anna Kournikova at the French Open.


"It will no longer be accepted," Giudicelli said. "One must respect the game and the place."

Social media, predictably, lit up in response, and wrapped up in the outrage are questions of racism, sexism and body issues.

Among the many who rushed to Serena's defense was Nike, her outfitter: "You can take the superhero out of her costume, but you can never take away her superpowers." - USA TODAY.

Now all of a sudden they're concerned about "respect for the game". Didn’t France just get upset with Trevor Noah about saying the country needs to chill with all the racism, due to the fact that their African soccer players won them a World Cup?
I apologize..I didn't know that being the best gives you special wardrobe privileges. I don't know that much about tennis.


The real reason why Serena wears a full body suit is due to tendency toward blood clots which nearly killed her when she delivered her baby. And wearing a suit like hers has been done before. Wearing a compression suit because of a history of life-threatening blood clots is not attention-seeking, it’s common sense.
Serena Williams Catsuit