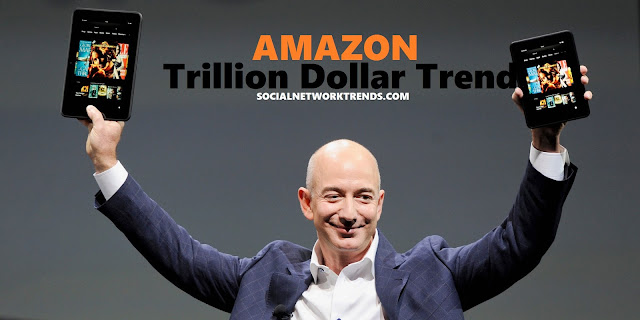 The topic on social media is attacking Amazon! Wages are not a topic that a senator should be wasting his time on unless the company is violating the minimum wage law or the overtime law.

The age of Amazon: from its humble beginnings as an online bookstore to becoming one of the world's most valuable company selling everything from apples to videos. Hope he treats his employees much better now that he has it all, that's amazing to see in our generation! The market cap hits $1 trillion, Bezos is worth $155 BILLION.

If the online retailer’s shares keep up their recent pace, it would be a matter of when, not if, Amazon’s stock market valuation eclipses that of iPhone maker Apple, which reached $1 trillion on Aug. 2.

Apple took almost 38 years as a public company to achieve the trillion dollar milestone, while Amazon got there in 21 years. While Apple’s iPhone and other devices remain popular and its revenues are growing, it is not keeping up with Amazon’s blistering sales growth".(Reuters)

This is why our tax laws need to be changed. Progressive tax rate for for people making over $100k and families making over $200k up to 90% rate. Looking forward to see if Democrats and Republicans in the Senate really put the interests of dire workers being worn off by Bezos’ feudalism and rampant wealth hoarding through paying them starving wages with no benefits from their unregulated working conditions.

According to CNBC - "E-commerce giant Amazon just made the top tier of the Fortune 500 for the first time. It also raised the price of its Prime service from $99 a year to $119, and many analysts are optimistic about the change. In a note to clients, Doug Anmuth of JPMorgan said, "We do not expect the company to get much push-back from consumers given the increasing value of the service."


The stock has generally been increasing in value too, so if you had invested in Amazon early on, your investment would have paid off. Your initial outlay of $1,000 in 2008 would be worth more than $20,000 as of May 25, according to CNBC calculations, or over 20 times as much, including price appreciation and dividend gains reinvested".- CNBC


If a company like amazon is making vast profits it has more than enough money to pay its employees good wages. This company and other companies like are a moral disgrace if their employees have to live off any form of public welfare.

I can only speak from my own experience and it seems like the number of complainers vs the number of employees is very low. 90% taxation at 200k? So you'll leave them with 20k a year to live on? This job makes it possible for us to pay out bills and hubby is getting a ton of experience and training. Thousands of Amazon workers have to rely on food stamps, Medicaid and public housing to survive. That is what a rigged economy looks like. His net worth increased by over 1 million times the average amazon wage last year. There is no excuse for him to not pay a living wage to every employee and make perhaps 26.9b next year instead of 27b.

We need strong unions in the United States to protect the interests of our workers. Especially when CEO's are more concerned with keeping their shareholders happy. Walmart, etc. The issue is minimum wage, the cost of living. The cost of living has quadrupled! Minimum wage hasn't gone up. Most pay above minimum wage which is great, but the cost of everything keeps going up! Capitalism is a failure!

The rigged system...I won a small amount, because of poor representation..and have had nothing but problems since, and have had a hard time making ends meet...Giants like these run through under-paid workers with no regard to their welfare--a lot like Walmart. Something has to be done. I should be able to take care of myself and my family, stand up for what I believe in & not be threatened or intimidated.

Tech corps are a problem: For a decade Apple has been storing $285 billion in overseas tax havens, enough "to meet the International Food Policy Research Institute’s yearly goal to end hunger by 2030—and buy Boeing or McDonalds with what is leftover."

After doubling in profits after a year Jeff Bezos is the only person on earth worth more than $100B.

His wealth far exceeds that of the world's next-richest person, Bill Gates. Amazon at trillion is good for all Americans! We all own a part of Amazon in our portfolios! Amazon is not the enemy here! Overbearing government regulation and taxation is what drains our pockets! Introduce a bill to limit spending at all levels. Return our money to us!

In conclusion the big problem that most people don't think about is that most companies don't fulfill their civic duty! Rather than raising taxes, the companies just need to give employees wages that they can live on or be penalized!
Amazon $1 Trillion Valuation