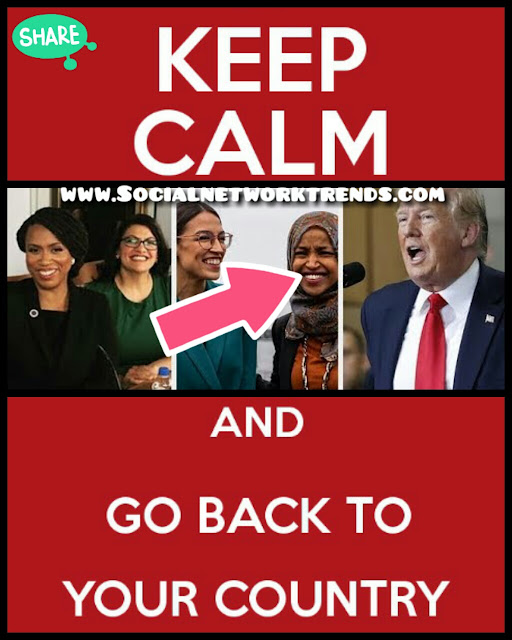 In wake of President's Trump Tweets telling minority congresswomen to 'go back' to their own countries, many shared their own encounters with the phrase.


On Sunday, Trump directed certain Democrat Congresswomen to, "go back and help fix the totally broken and crime infested places from which they came" before telling "the United States, the greatest and most powerful Nation on earth" - how to run it's government.

Instead he referred to “Progressive” Democratic Socialist congresswomen, and then noted that they “originally came from countries whose governments are a complete and total catastrophe, the worst, most corrupt and inept anywhere in the world (if they even have a functioning government at all), now loudly and viciously telling the people of the United States, the greatest and most powerful Nation on earth, how our government is to be run.

Why don’t they go back and help fix the totally broken and crime infested places from which they came. Then come back and show us how it is done. These places need your help badly, you can’t leave fast enough. I’m sure that Nancy Pelosi would be very happy to quickly work out free travel arrangements!”

Remember when “some people did something “ on 9/11 and she was having fun?  Remember she married her brother to come to America? Remember she didn’t pay her taxes? She is actually trying to destroy our country, she is completely against Americans.


The quote suggest that, Trump’s demagogic tweet storm yesterday against the Congresswomen of “The Squad” was Trump’s countermeasure against the start of a "#StopFollowingTrump" campaign 2 days ago, stemming his 2-week decline in Twitter Followers change quantity:

The following is a collection of tweets from celebrities who shared their own encounters with the phrase "go back to your country".


British politicians are just as cowardly as American Republicans -


Also, Both Boris Johnson and Jeremy Hunt condemn Donald Trump's comments telling four congresswomen to go back to the "broken and crime infested" countries they came from, but refused to call the President racist.


Trump defended tweets he sent out against Democratic congresswomen over the weekend, with have been widely criticized as racist.

Correction & Clarifier- this precious country of America BELONGS TO LEGAL U.S. citizens and we will not stand for our Immigration laws being violated and abused!

All 3 cable news networks carrying the Congresswomen's presser live, and "shithole" was not bleeped.

Trump supporters are so proud of the President. We would be mad if President Trump tweets any different. He is so right. If you don’t like this country Please GTFO! Go back to salmonella or wherever tf you came from diaper head! God Bless America! Trump 2020.