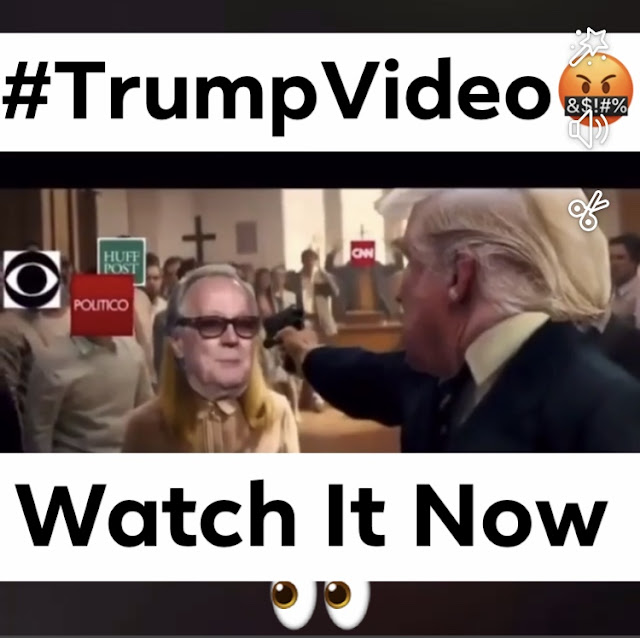 Here's the video THEY are losing their minds over...ENJOY! - (Social Network Trends)

The most interesting this about the “TrumpVideo” and again it was vile and I denounce it, is that no one would know it existed, or would have seen it, if not for the media faux outrage.


Strange how people who loved the original movie appear to be those most upset by the new Trump video. Was it art when a preacher was killing an entire congregation—gore and all, but not when 'Trump' is killing mostly a bunch of blockheads? Maybe it is/was never a great scene.
We’ve noticed that there are people who believe that those responsible for the video/meme could potentially be found guilty of negligent publication and incitement, and sued if anyone acts out on its violent fantasies. They  may also have a duty of care to warn those depicted in the video.


“The video rampage was shown during a three-day conference held by American Priority at Trump's National Doral Miami, according to the organizers.

In the parody video, Trump's head is superimposed on the body of a man opening fire inside the "Church of Fake News," according to The New York Times, which first reported the playing of the video.

The churchgoers' faces have been edited to include several political critics including the late Sen. John McCain, R-Ariz.; Bernie Sanders, I-Vt.; Rep. Maxine Walters, D-Calif.;and Hillary Clinton as well as logos of various news organizations, including CNN, The Washington Post, Politico and NPR.

White House Press Secretary Stephanie Grisham said in a tweet Monday morning that the president had yet to see the video but that he condemns the contents based on reports. She said he would see it shortly. Trump has yet to respond directly.”


Remember when the same people furious about the ‘TrumpVideo’ that President Trump had nothing to do with, were also furious at this video by Snoop Dogg? Me either.

Hypocrites in Hollywood and in the media! Were they upset when this violent movie first came out? This is more violent than Joker. Colin Firth had fun making this scene. So I challenge Hollywood to stop making violent films or just shut up about things like this and gun control.
Trump video viral