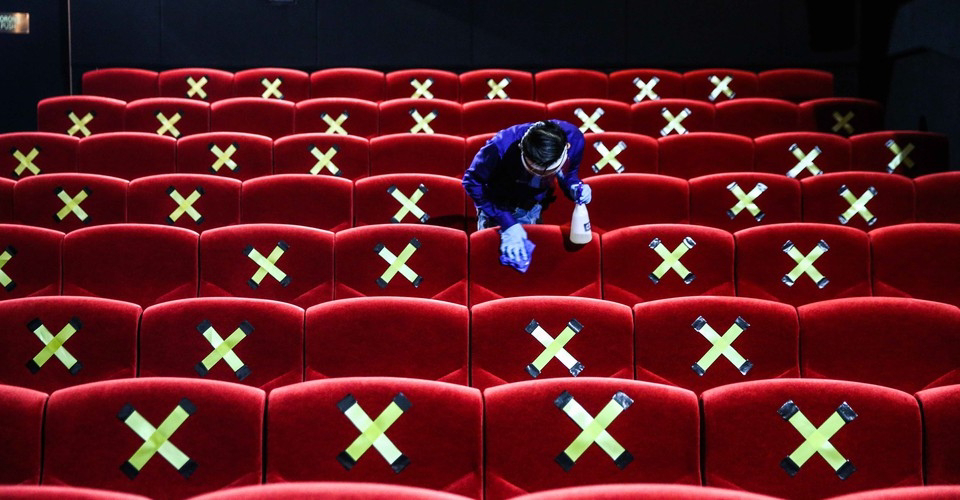 A year into the Covid-19 pandemic,   studios and movie theaters hope a recovery is on the way. According to Dow Jones Newswires -

Some theaters in two of America's biggest box-office markets,  and , will be open this weekend after being closed for the better part of the past year. As cities slowly reopen public spaces and more Americans receive vaccines for Covid-19, moviegoing is poised for a comeback, though there is a long way to go before all the nation's screens are flickering alight.

Theater owners are gearing up. Some  executives are advancing film releases that had been delayed. And for films scheduled to open in theaters in coming weeks, customer interest in returning, plus box-office results in  and , will begin to test the wisdom of studios' unprecedented decisions in the past year -- namely to premiere films simultaneously in theaters and on digital streaming services. 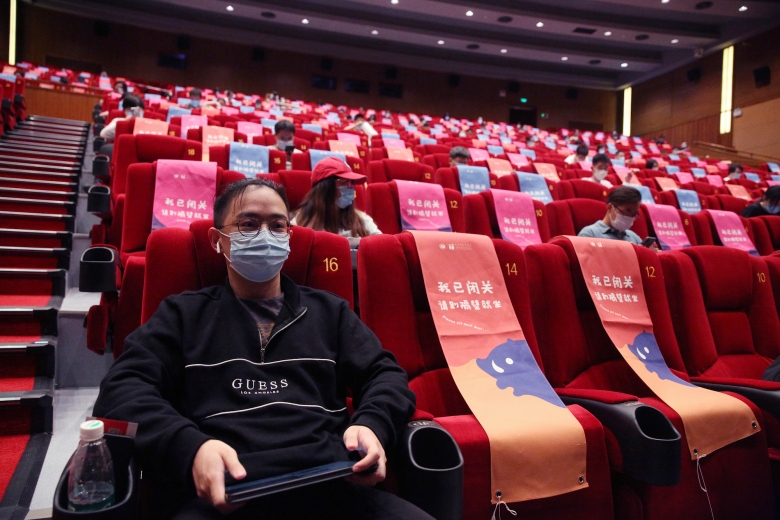 Movie theaters elsewhere in the  have been open for months, including in , , and , but box- office results have been grim. The largest top few movie-theater markets in the  make up a large percentage of box- office revenues when a film comes out.

"Adrenaline is definitely pumping and definitely excited about reopening, " said , who manages  Angelika Film Center in the trendy SoHo area, as well as two other city theaters. "With the fact that we should have all adults in the  vaccinated by the end of May, it gives me great hope that we will have a summer blockbuster season."

said earlier this week he expects the  to have sufficient vaccine supplies for all American adults by the end of May.

Still, theaters owners can't pack auditoriums, and many major theater markets remain closed, including in  studios' home base of . 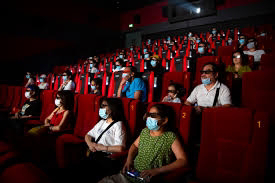 , though encouraged by reopenings, said it will hold off resuming operations at its more than 500 U.S. theaters until its leadership is convinced big-budget movies are sure to follow. " Once  follows suit, we are confident in the studios holding their release dates for new movies, allowing us to reopen our theatres," the company said.

Both  and  are requiring theaters to cap attendance at 25%, and cinemas will mandate that moviegoers wear masks. And it remains unknown whether a much-anticipated pent-up demand for popcorn and big screens will manifest, after more than 500,000  deaths from Covid-19 and lingering public fear about gathering in indoor spaces.

biggest studio, , has some confidence. On Friday, the studio is debuting "Raya and the Last Dragon" in more than 2,000 North American theaters. It has been one year since  opened a new movie in domestic theaters.

is simultaneously making the movie available to subscribers of its streaming service Disney+ for an additional , which means some people are likely to watch the animated family film at home.

The last film  released exclusively to North American theaters was Pixar's "Onward." It hit more than 4,000 theaters on  but sputtered at the box office amid the worsening pandemic and theater closures.

, director of Paramount Pictures' highly-anticipated sequel "A Quiet Place Part II" announced on Twitter late Thursday that his film's release has moved up to  weekend in May from its previously scheduled premiere in September.

is also waxing optimistic about May. This week the studio said it would release " 2: The Runaway" in May rather than June. The studio chose to debut the movie in theaters sooner because of recent signs of recovery and encouraging demand for family films, according to a person familiar with the matter.

Family films have performed better than others in recent weeks.  animated sequel "The Croods: A New Age" had grossed  through last weekend, according to Comscore, after a relatively strong 14-week run in theaters. Last weekend, another family title, Warner Bros.' "Tom & Jerry," took the top spot domestically after generating  in ticket revenue, Comscore also said.

Like all of the studio's 2021 releases, "Tom & Jerry" could also be viewed on streaming service HBO Max, which, like Warner Bros., is a unit run by AT&T Inc.'s WarnerMedia. 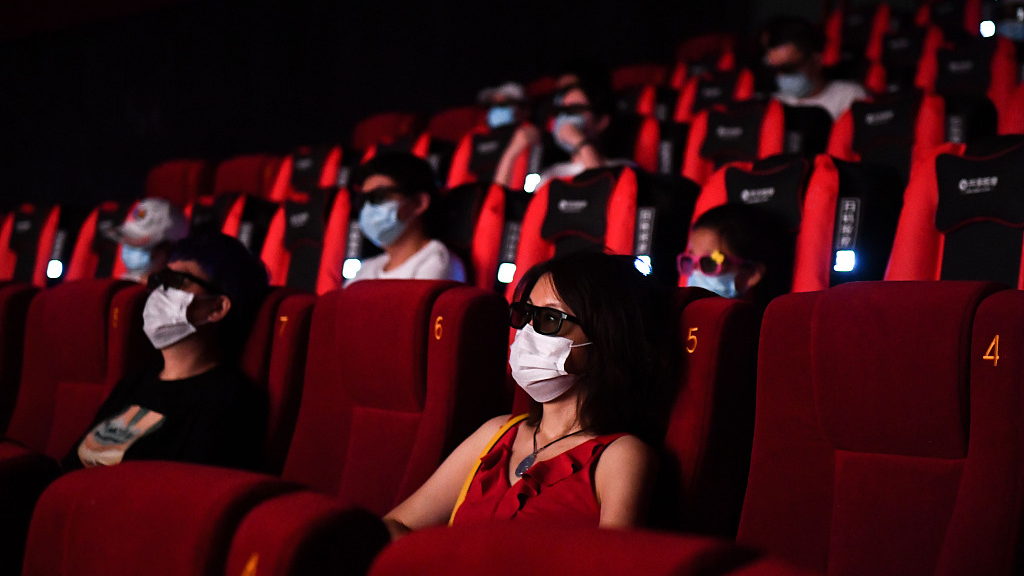 During the pandemic,  studios either focused on their streaming services, delayed releasing their most- coveted projects, or sold films to competitors for online distribution. As a result, the nation's largest theater chains, which also include  and , saw their chances to generate revenue dwindle. AMC managed to fend off bankruptcy several times during the past year.

As selected cities and states have loosened restrictions amid the pandemic's fluctuations, AMC and Cinemark reopened some theaters at reduced capacity. They also implemented social-distancing measures and heightened hygiene protocols.

Many theater owners expect  studios to begin releasing high-profile films again only after moviegoers demonstrate they are comfortable returning to multiplexes and the rest of , principally , also reopens.

Franchise films like MGM Holdings Inc.'s latest installment of the James Bond franchise "No Time to Die" and  Marvel spinoff "Black Widow" typically drive the majority of ticket sales. The two films, among many other big- budget titles, have been delayed repeatedly during the pandemic. Currently, "Black Widow" is slated for early May in the  and , while "No Time To Die" is scheduled for .

In an effort to return life to normal,  Gov.  took a more aggressive approach than many other states and companies when he lifted pandemic-related restrictions on businesses in  and cancelled the state's mask mandate. The move brings a host of complications for businesses including movie-theater chains. , founder and executive chairman of -based chain , joined a chorus of companies saying they would continue to follow public-health recommendations and maintain Covid-19 protective protocols. The chain also this week announced it had to permanently close two  locations as part of a chapter 11 bankruptcy filing.

"If you relax mask mandates now, what about the people there in the venue, that work there every day? They're at risk,"  said.

While  says he ranks this week's news as some of the best he's heard in months, his Alamo theaters in  and  will remain closed this weekend, because the dine-in experience the chain offers demands added preparation before reopening.

"There are a lot of signs of encouragement and I'm confident that later on this year that we're going to return to some level of normalcy," he said. "But it all depends on peoples' comfort level of getting out of the home."