Why The Carters Look So Tiny Alongside Joe Biden and Jill In This Viral Picture? www.Socialnetworktrends.com 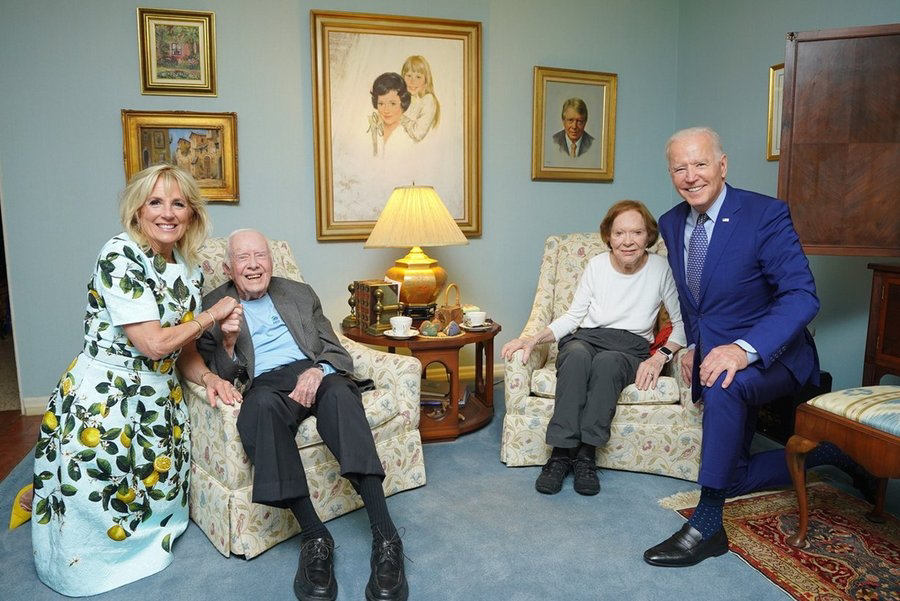 The Carter Center released a photo from President Joe Biden and first lady Dr. Jill Biden’s visit to the home of Jimmy and Rosalynn Carter in Plains, Georgia. The photo caused confusion as some questioned why the sizing and proportion of the Bidens next to the Carters looked so different.
Photo journalists, video experts and others have explained that a wide angle lens in a tiny room, which distorts what's closer to the camera, is the likely cause.
"The image is possibly distorted by using a wide-angle lens. When taking photos in a smaller space you often don’t have room to move far enough back to get everyone in the frame, so you use a lens that can take it all in. Unfortunately, if you use a lens that is really wide, while also standing very close to the subjects, it will distort the photo, making those close to the camera appear giant while shrinking those further away." — Guardian
"On images shot with a wide-angle lens, perspective appears to be exaggerated: Nearby objects may look much bigger (and hence nearer) than they really are, and faraway objects look even smaller and further away. This effect also amplifies distances between objects, i.e., things look further away from each other." — Yahoo News.
The answer! From a pro: "The photographer used a wide angle lens, people. Carter's feet aren't 3 times longer than his wife's feet, either."
"Although President Biden is kneeling much farther in front of Rosalynn Carter, the flash reduces shadows, a key part of what allows objects to have depth. The resulting effect is that Biden and Rosalynn Carter appear to be side-by-side on the same plane." — The Washington Post.
Folks confused by the Biden seeming titanic, it’s an artifact of using (and correcting distortion for) a wide-angle lens in a small space to get everyone in—outer edges look MUCH bigger than center. Here’s a rough reverse correction, and the proportions now make sense.
Distorted Lens joe biden The Carter's